This semi-transparent piece of fluorite has a deep purple color with a glassy surface, as shown in the lower right corner of the first image. The photo highlights the stepped growth of the cubic crystals. 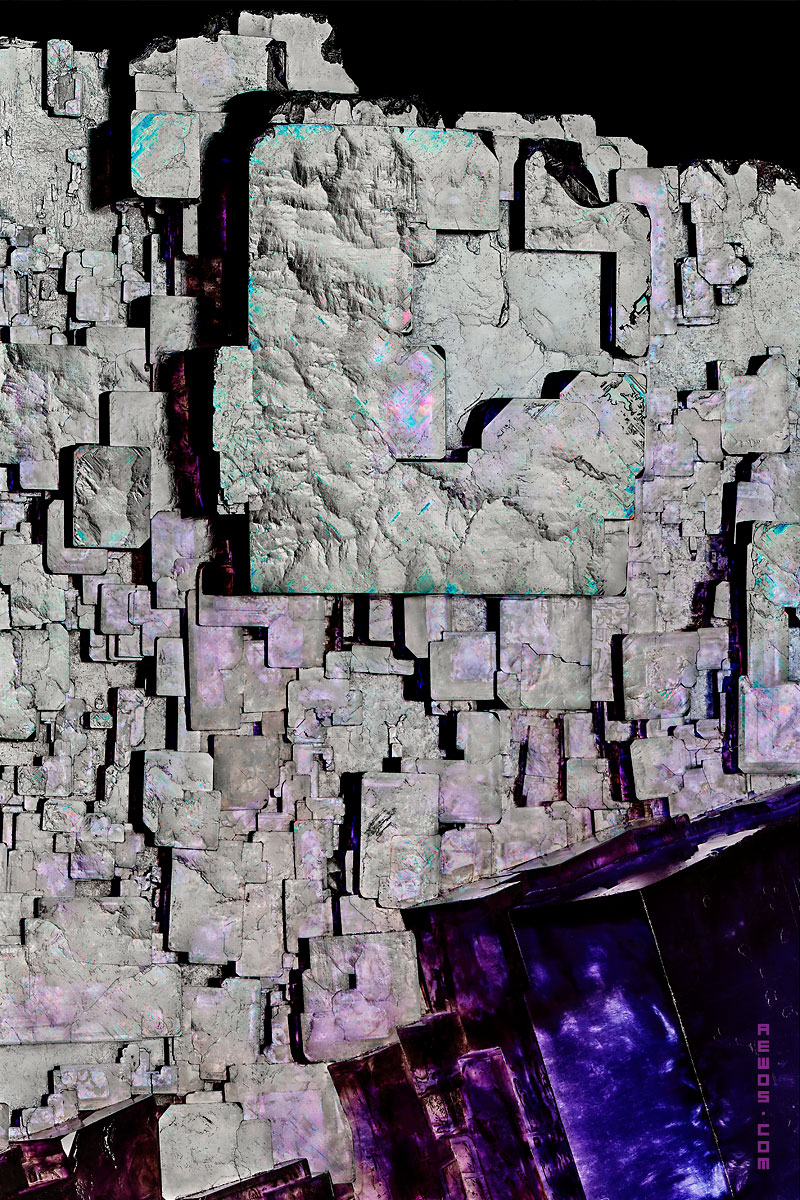 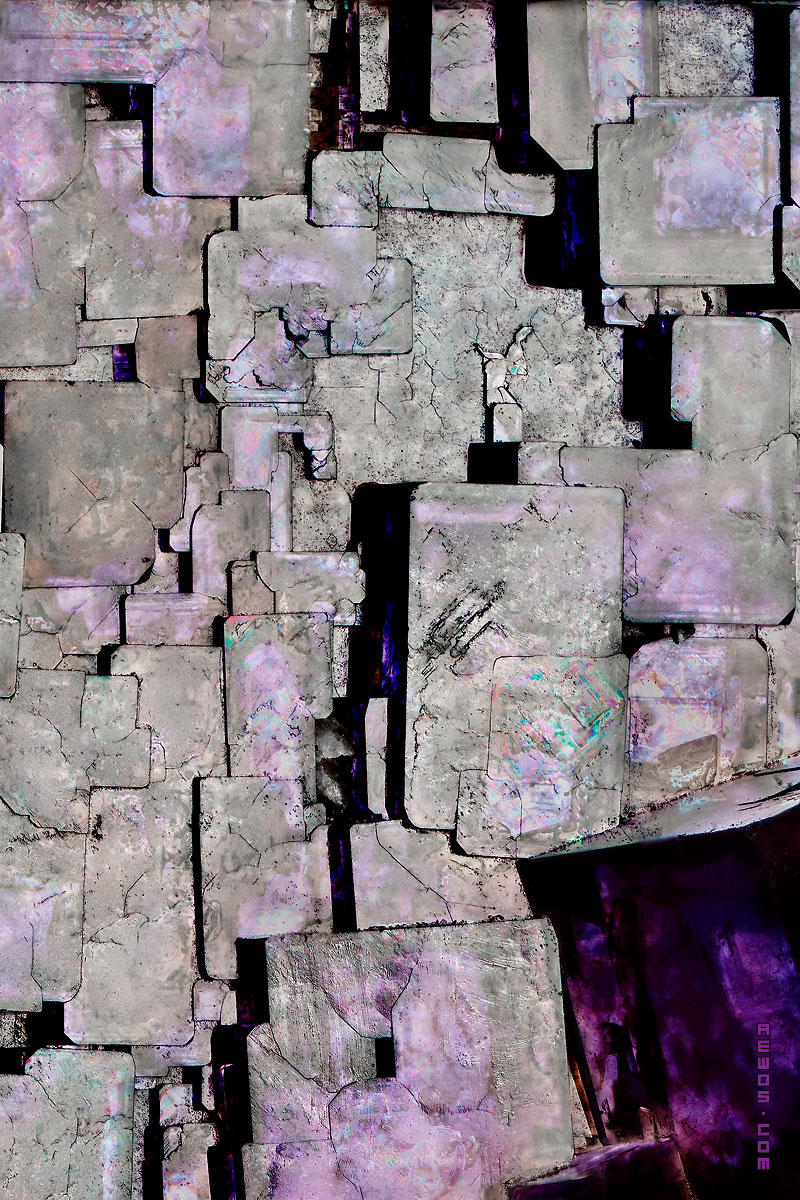 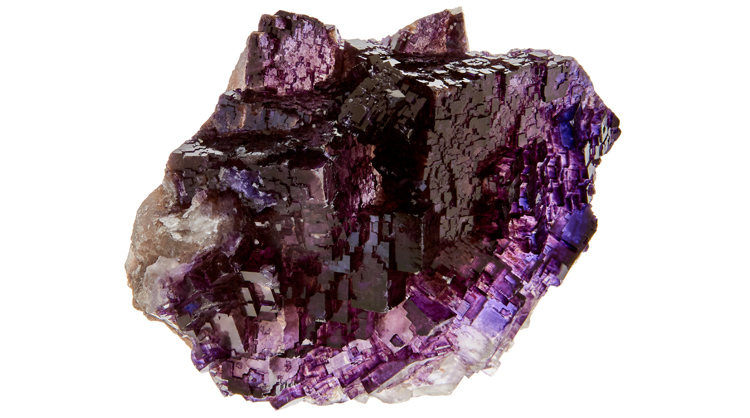 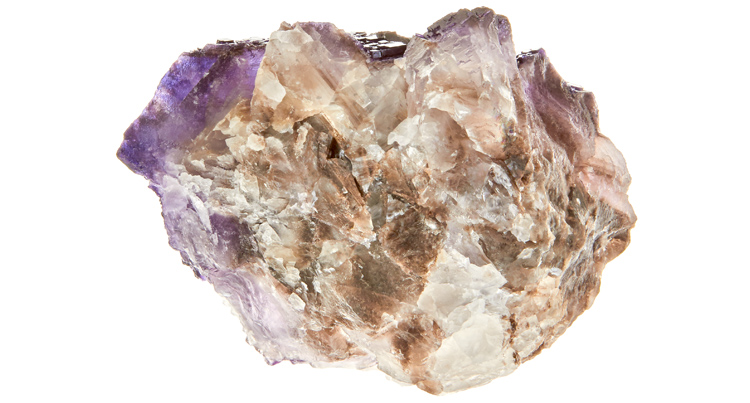 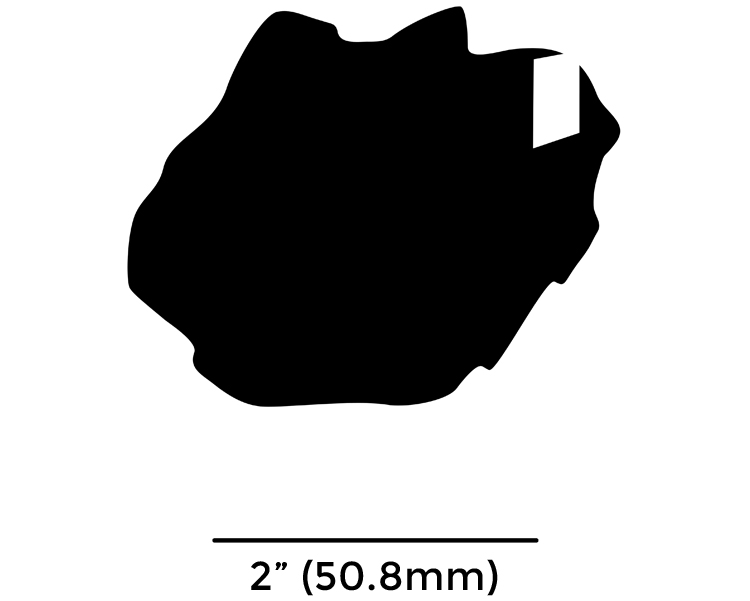 The image below shows the impact of the lighting on the piece. On the left is the view through the camera’s viewfinder, and on the right a single frame as captured by camera. The flash was positioned so that most of the light reflected off the face, emphasizing the surface details/depth at the cost of reproducing the color. 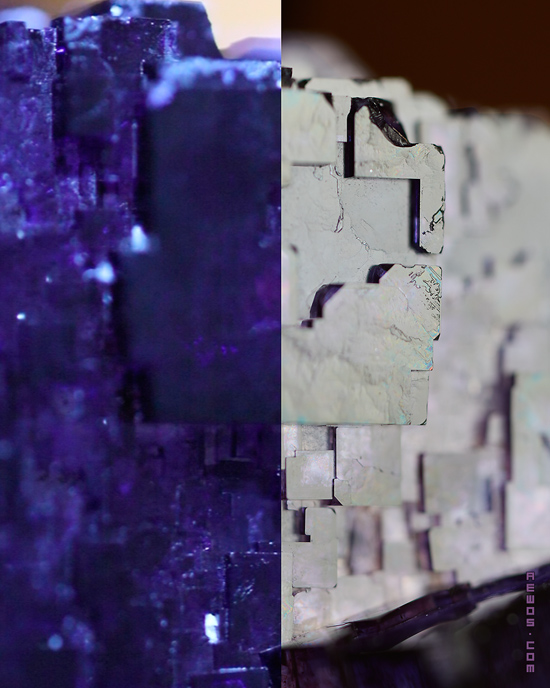 Fluorite is composed of calcium and fluorine (CaF2)(1, 2). It is a relatively soft material that ranges from transparent to translucent and is found in purple, green, yellow, blue, pink, colorless, and other varieties (1, 2, 3, 4)(i, ii). In some cases it also glows blue-violet, pale yellow, or other colors under ultraviolet light (2, 4, 5, 6)(iii). This is typically caused by impurities of rare earth elements (6). Electrons in these elements are excited to a higher energy level when exposed to UV light, and emit photons/glow as they fall back to their ground state (7). The word “fluorescence” was coined after this phenomenon in the mid-19th century by George Gabriel Stokes (2, 5). Some fluorite is also phosphorescent, thermoluminescent, or triboluminescent (4, 6, 8)(iv). Industrially, fluorspar (concentrates of fluorite) is predominantly used in the manufacture of hydrofluoric acid, which is then used in a wide range of chemicals like refrigerants, non-stick coatings (e.g., Teflon), anesthetics, etc (8, 9)(v). Fluorspar is also commonly used in steel production, where it serves as a flux that lowers the melting point of the iron ore, helps remove impurities, and improves the fluidity of the slag (5, 8, 10). (Slag is a by-product that is removed when the iron is separated from the ore.) The use of fluorspar as a flux was known and recorded in the 16th century by Georgius Agricola (see the illustration below)(9, 11, 12). He called the mineral “fluores,” as derived from the Latin word “fluere,” which means to flow (2, 4, 9, 11, 12). By the mid- to late 18th century, scientists had crudely produced hydrofluoric acid (10, 11, 12)(vi). Isolating fluorine, however, proved to be a difficult and dangerous task and a number of scientists (a.k.a. the “fluorine martyrs”) were injured and even killed by their experiments (10, 11, 12, 13)(vii). The feat was finally accomplished by Henri Moissan in 1886 (11, 12, 14). Fluorine is a pale greenish-yellow gas at room temperature (11, 12). It is the most reactive element on the periodic table and very rarely exists in nature in free form (i.e., not as a compound)(10, 11, 14, 15). When in a jet/thin stream, the gas can apparently ignite organic materials (like water) on contact without a spark (11, 15). It is also toxic (11, 15). While fluorine is highly reactive, fluorine compounds like carbon-fluorine are highly stable (11, 15)(viii). 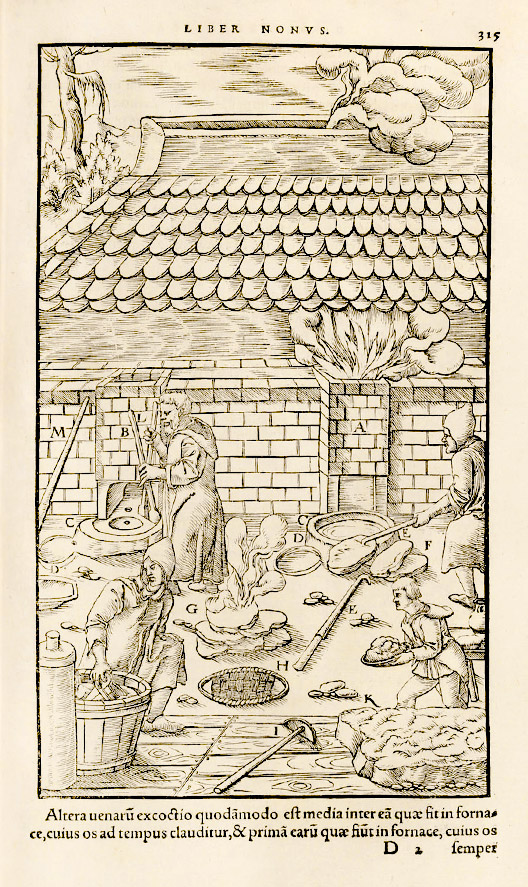 Illustration of an iron foundry, where German miners used fluxes as part of the smelting process (11). From G. Agricola’s De Re Metallica, first published in 1556. Image courtesy of The Linda Hall Library of Science, Engineering & Technology (p. 315)(CC BY-NC-SA 4.0 (Edits: rotation/cropping, levels/saturation, sizing)). For an English translation of the text and illustration, see p. 386 of the Project Gutenberg eBook here. A footnote referring to fluorspar is here.

i. At ~150 on the Knoop scale, fluorite has roughly the same hardness as copper (16). It is also the representative mineral for the level 4 hardness on the Mohs scale (16).

vi. In the 1670s, Heinrich Schwanhard reportedly treated fluorspar with sulfuric (or another) acid and produced a substance that could etch glass (11, 12). A century later, Carl Wilhelm Scheele investigated this process and concluded that sulfuric acid liberated another acid from fluorspar, which he named fluoric acid (i.e., hydrofluoric acid)(10, 11, 12). Scheele’s premature death (at the age of 43) may well have been caused by his habit of tasting his preparations (which also included other toxic gases)(11). Other scientists whose work contributed to the eventual isolation of fluorine included André-Marie Ampère, Sir Humphry Davy, Thomas and George Knox, Edmond Frémy, and George Gore (11, 12).

vii. Paulin Louyet and Jerome Nickles died from their experiments with fluorine, likely due to inhaling hydrogen fluoride (11, 12, 13). Other scientists injured during this period included Sir Humphry Davy, Thomas and George Knox, Louis-Joseph Gay Lussac, and Louis-Jacques Thenard (10, 12). Davy injured his eyes and fingernails, while the Knox brothers suffered hydrofluoric acid poisoning (from which Thomas Knox apparently nearly died)(10, 12). A student of Moissan’s, Alfred Stock, wrote that Moissan had told him that his life had been shortened by ten years because of his work on fluorine (10). Moissan died of acute appendicitis in 1907, less than three months after being awarded the Nobel Prize for isolating the element (11, 12).

viii. Chemicals in the PFAS (per- and polyfluoroalkyl) class have been used in commercial and industrial applications since the 1930s-1940s (19, 20). They resist heat and repel materials like water, oil/grease, and stains due to the strength and stability of their carbon-fluorine bonds (19, 20, 21). They are used in the production of non-stick pans, waterproof clothing, food wrappings, fire-fighting foams, sunscreens, floor polishes, and other products (19, 20, 21). The strength of their bonds, however, also makes them highly resistant to environmental breakdown (19, 20, 21). PFAS chemicals have been called “forever chemicals” as they can persist in and pollute the environment for long periods of time (e.g., decades to centuries, or perhaps longer)(19, 20). Some of the 4,000+ PFAS chemicals (like PFOA and PFOS) have been recognized as PBTs, referring to their persistence (P); ability to accumulate inside the human body and wildlife (Bioaccumulative); and link to health problems (Toxicity), such as ulcerative colitis, thyroid disease, and testicular and kidney cancer in humans (19, 20, 21). PFAS are also highly mobile and can move through soil into groundwater, plants, and livestock and be carried long distances via precipitation and oceanic/atmospheric currents (20). The 2019 movie Dark Waters brought greater public attention to these chemicals.

2. The University of Minnesota. (n.d.). Fluorite. Retrieved from the U of M Department of Geology.

3. Jones, B. (n.d.). Introduction to fluorite. Retrieved from the Tidewater Gem & Mineral Society.

9. US Geological Survey (USGS). (2010). Mineral resource of the month: Fluorspar. Retrieved from the USGS.

12. Toon, R. (2011). The discovery of fluorine. Retrieved from the Royal Society of Chemistry.