This is a photo of a placid giant owl butterfly (Caligo placidianus) from Peru, showing an eyespot and the scales that cover the underside of the forewing. The eyespot here is one of the smaller ones on the wing, with a diameter of about 1/8″ (3mm). The larger eyespots on the hindwing have a diameter of around 5/8″ (15mm). 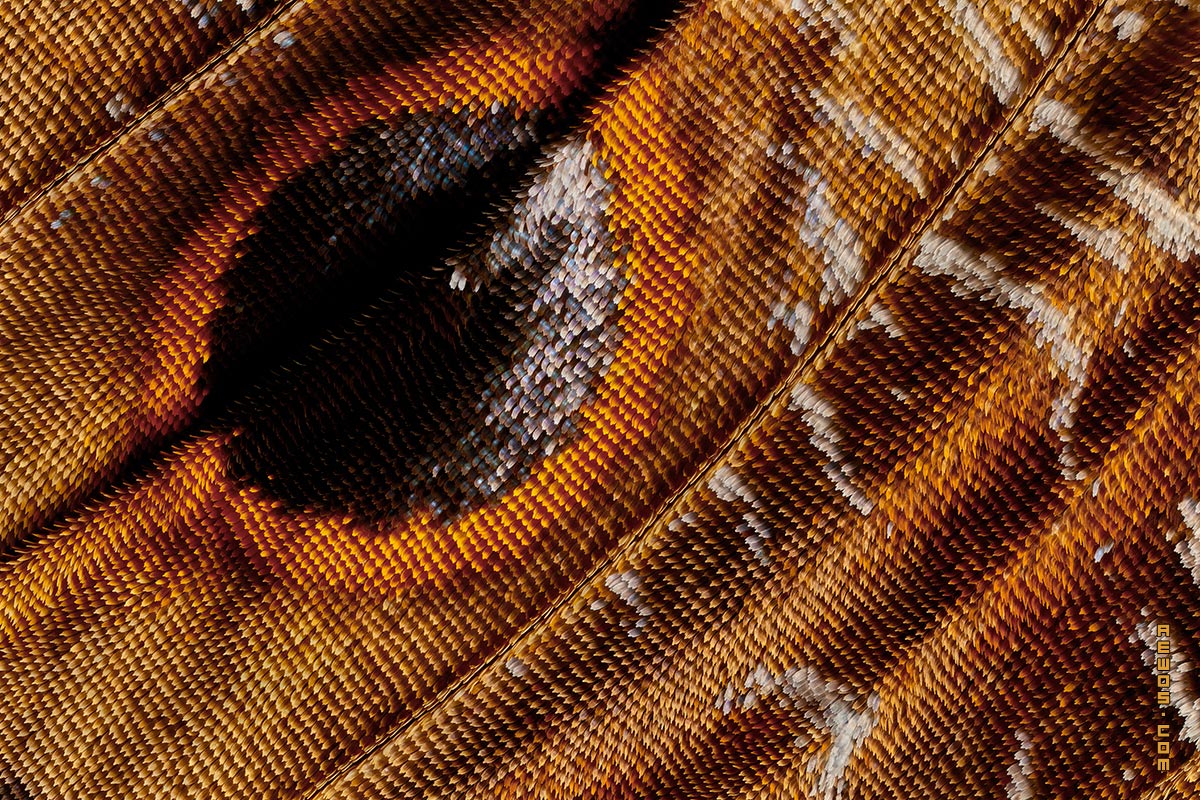 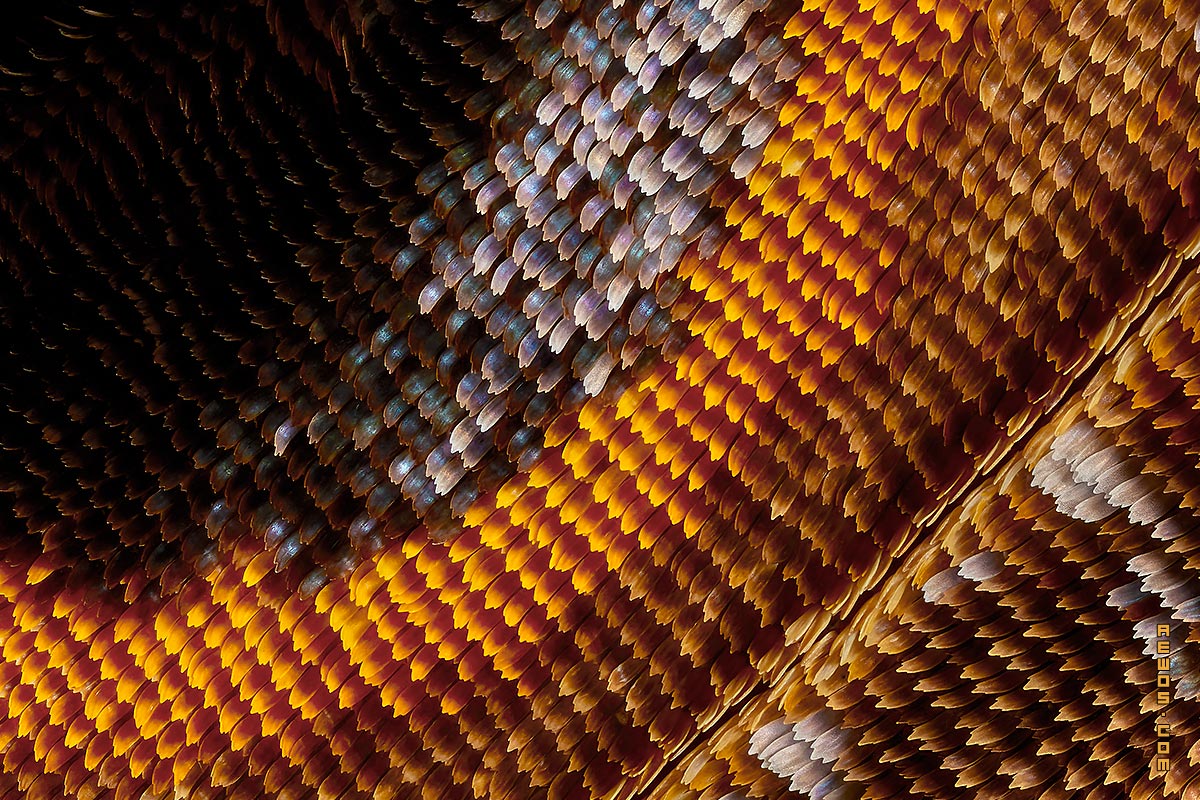 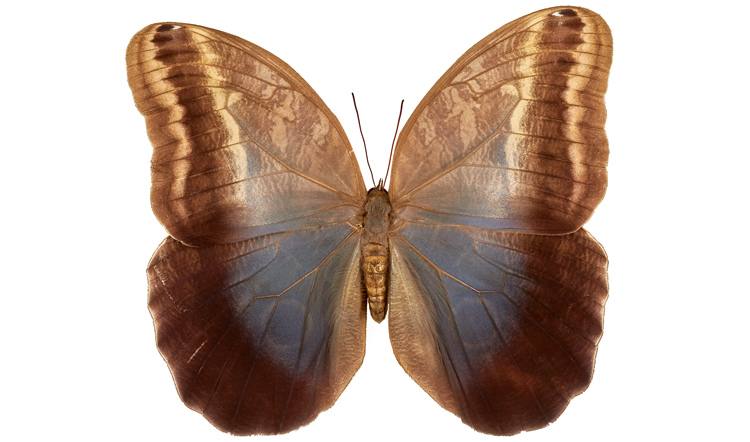 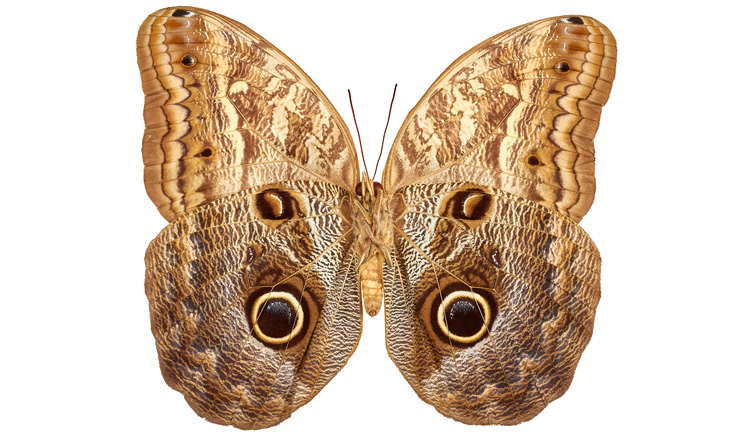 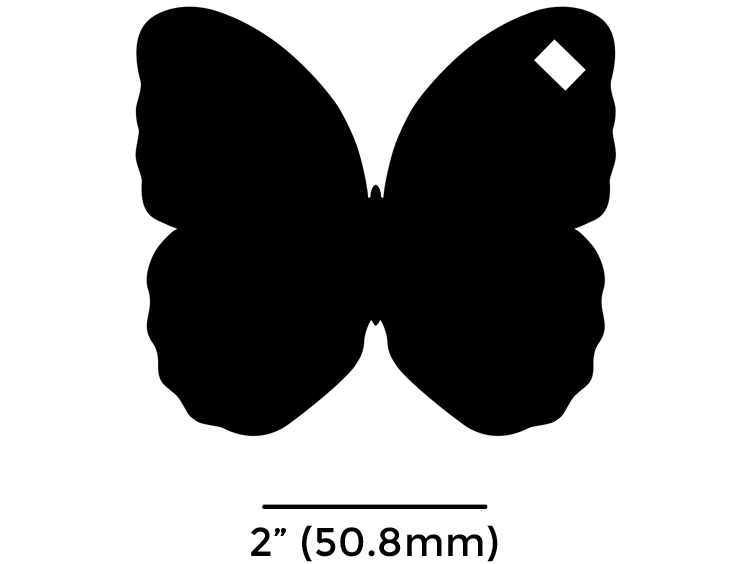 Eyespots are found on both moths and butterflies (1). It is traditionally believed that they are used to either intimidate predators or divert their attack (1, 2, 3). In the first case, the eyespots are intended to look like the eyes of larger, more formidable animals. This is where the name for the “owl butterfly” above came from (1). The lighter white-colored scales on the edges or in the middle of the spot are designed to mimic the highlights you would see reflecting off a three-dimensional eye (1, 2). An offshoot of this idea is that the predator may also simply be startled by the show (conspicuousness) of the eyespots, and avoid the butterfly based on sensory overload, some sort of learned bias, or it being an unknown stimuli (2). In the diversion theory, the eyespots focus the predator’s attack on the wings, rather than the body of the butterfly. The predator would think it is attacking a more vital part of the butterfly (1, 2), while the butterfly would have a higher chance of surviving if it escaped with only damaged wings. Fairly recently a scientific team tested the first hypothesis, presenting wild birds with a series of images in the lab and observing their reaction (2). The images were of 1) an owl with open eyes (the owl is a natural predator of the birds), 2) an owl with closed eyes, 3) an owl butterfly (Caligo martia) with real eyespots, 4) an owl butterfly with digitally altered eyespots (to test the conspicuousness theory), and 5) an owl butterfly with the eyespots digitally removed. The team found that the image showing the real eyespots of the owl butterfly was as effective at deterring the birds as the image of the owl with open eyes. The other images did not elicit as great a response. Surprisingly, there was no response difference between the image of the butterfly with digitally altered eyespots and the one with no eyespots (2).

1. Osterloff, E. (2018, May 29). Why do some butterflies and moths have eyespots? Retrieved from the Natural History Museum (UK).

2. De Bona, S., Valkonen, J.K., Lopez-Sepulcre, A., & Mappes, J. (2015). Predator mimicry, not conspicuousness, explains the efficacy of butterfly eyespots. Proceedings of the Royal Society B, 282. Retrieved from The Royal Society.