This is a photo of a pyrite cube, possibly from Washington State. The side-lighting in the photo highlights the topographic-like striations on the surface, while the black areas are reflecting the camera lens/possibly the room (the shutter speed is fast enough to eliminate any environmental light). The edge at the top of the photo is irregular as a chunk of the specimen was broken off at some point (or maybe it was part of a larger cluster). 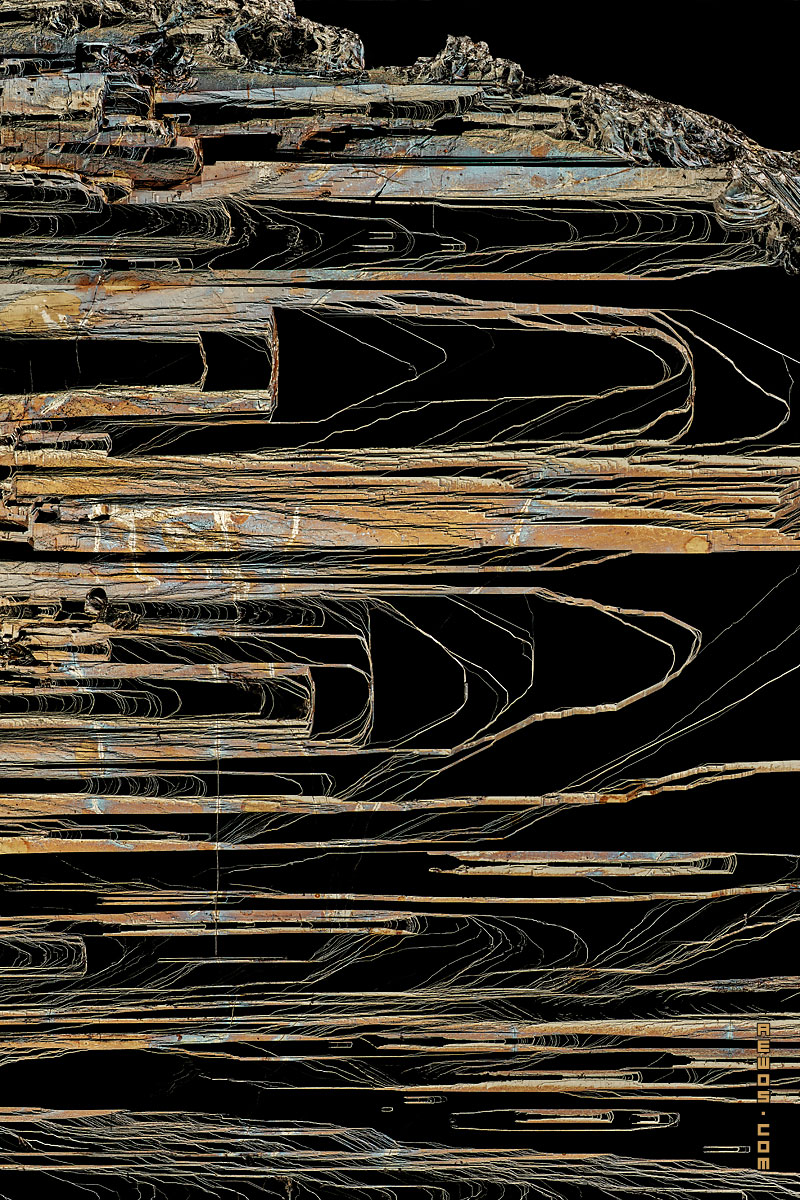 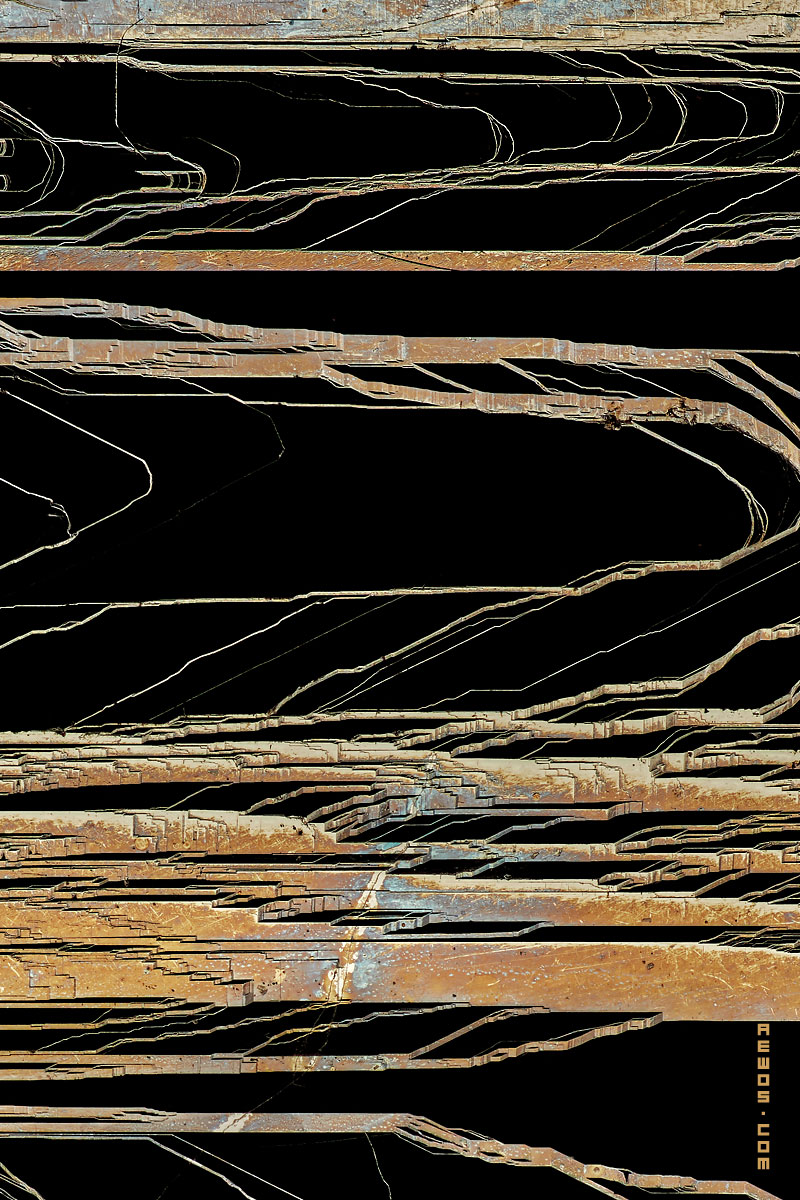 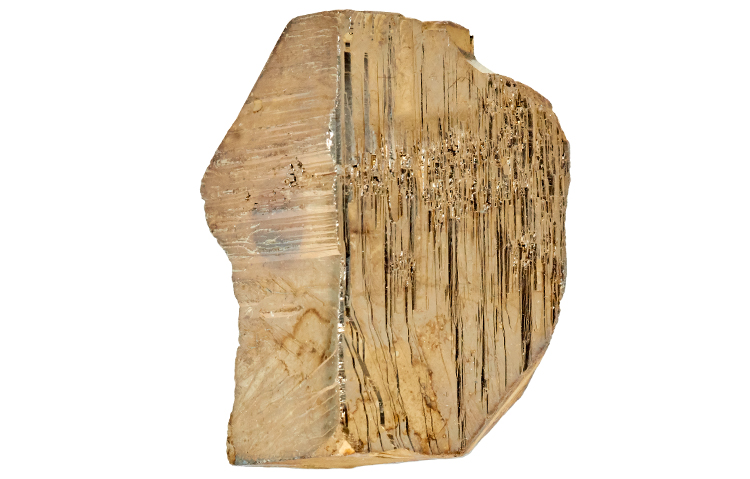 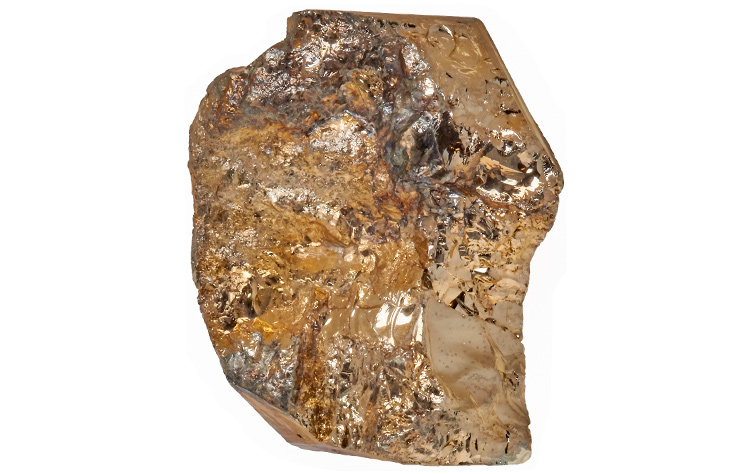 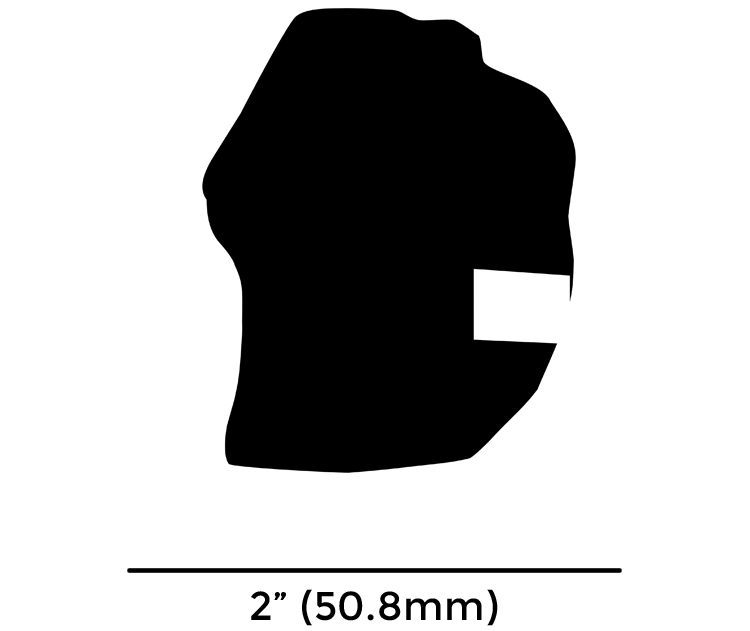 Pyrite is a common mineral composed of iron and sulfur (1). It’s name is derived from the Greek phrase “pyrites lithos,” which means “the stone which strikes fire” (2). This is because it creates sparks when struck against metal or a similar hard material (1). It’s common nickname is of course “fool’s gold” (1). You can fairly easily tell the difference between pyrite and gold by testing the streak, hardness, and specific gravities of the materials (1, 2)(i). Gold is known to form in the same rocks as pyrite, or even within the pyrite itself, though it occurs in small quantities (1, 2, 3). Interestingly, it is estimated that 90% of the pyrite on Earth is formed as a result of microbiological processes (3). (More information on sulfate reducing bacteria can be found on the pyrite “sun” page here.) In terms of crystallization, pyrite commonly forms as cubes, octahedrons, and pyritohedrons (1, 2, 3, 8)(ii). These forms can occur in combination (e.g., the tips of an octahedron are flattened off with cubes)(3, 7). (You can see some illustrations of how different geometries are combined on this page.) Apparently the shape of pyrite is largely determined by the concentration level of iron and sulfur (4)(iii). Pyrite also forms as flat concretions called “suns” (as previously mentioned) and tiny spheres called framboids (1, 2, 3). The latter are covered with cubic crystals and look somewhat like raspberries (1, 3). Both of these are commonly found in muds, shales, and/or coal deposits (1). The cube is the most common of all the forms (3). Looking back at the specimen above, the striations are caused by the crystals alternating between cubic and pyritohedral forms as they grow (5, 7). Overall they are perpendicular to the edges of the cube and run in three directions, where the front face matches the back face, the top face matches the bottom face, and the right face matches the left face (see figures III & IV)(4, 5, 6, 7, 8). From the illustrations below we can see then that the striations actually show the lower symmetry of the pyritohedron, not the higher symmetry of the cube (fig. V)(5, 6, 7). In the macro photos, we can also see some similarity between their contours and those on the hybrid pyritohedral-cubic form (fig. VI)(7). 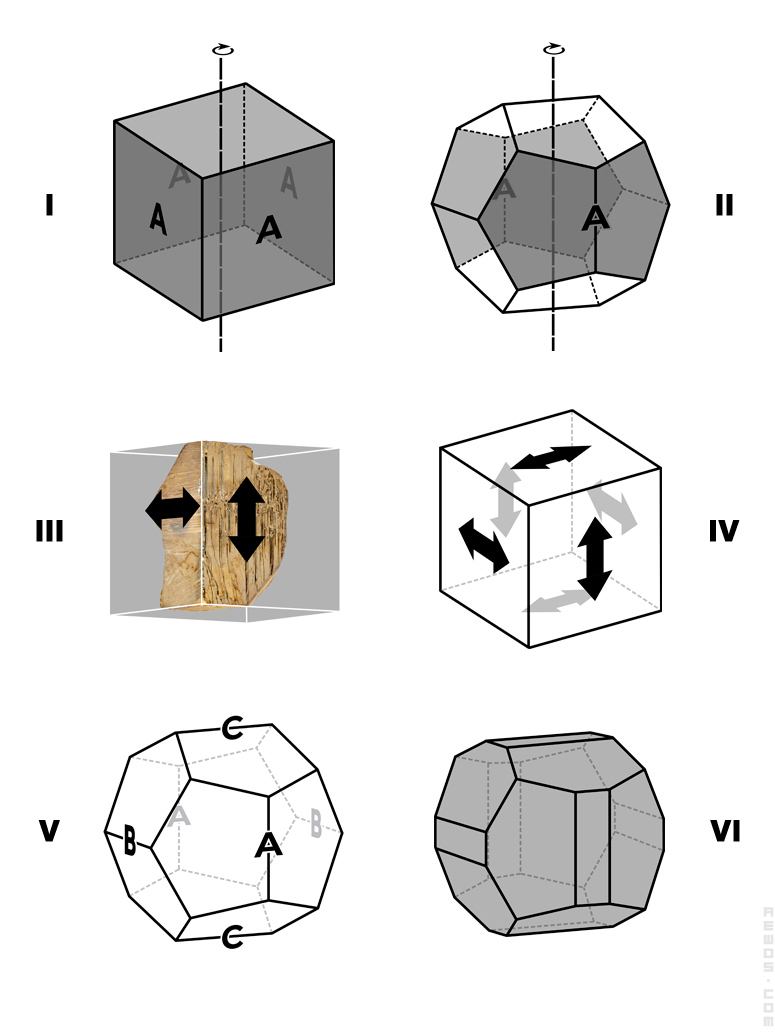 i. Gold is heavier and much more dense than pyrite (1, 2). If you scratch a sample on a piece of porcelain, gold’s streak looks yellow or gold, while pyrite’s looks greenish- to brownish-black (1, 2). Gold is also very soft and can be scratched with a pin, while pyrite is harder/more brittle and will break under pressure (1, 2).

ii. As seen here, octahedrons have eight faces, as if you connected two pyramids at their bases. In formations of pyrite, these may have the tops flattened off with cubic faces (3). Pyritohedrons have 12 pentagon shaped faces, similar to the pentagonal dodecahedron seen here. The difference is that all the edges of the pyritohedrons are not the same length (7). On each pentagon, there is one side that is longer (i.e., in figure V, these sides are marked with the letters A, B, and C)(5, 7). This illustration shows how the cubic crystals of pyrite are organized into the pyritohedral shape.

iii. Pyritohedrons form in high concentrations of iron and sulfur, octahedrons in lower concentrations, and cubes in the lowest concentration (4). The crystal form will complete with a steady supply of materials, but if the iron and sulfur are depleted faster than they are supplied, you can see combinations of forms (e.g., an octahedron ends up with flattened off tips that are cubic)(4).

iv. Another way to describe a cube is to say that it has three axes of four-fold symmetry. This means that there are four repeating views in one rotation, and this happens on each of the three different axes–top to bottom, right to left, and front to back (9). A cube also has four axes of three-fold symmetry (where the axes pass through opposite corners) and six axes of two-fold symmetry (where the axes pass through the middle of opposite sides)(9). You can try the different symmetries here.

v. The pyritohedron has three axes of two-fold symmetry (as shown in the example above), and four axes of three-fold symmetry (where the axes pass through the opposite vertices that connect three equal segments)(9). This can be seen here.

2. Feick, K. (n.d.). Pyrite. Retrieved from the Earth Sciences Museum at the University of Waterloo.

3. Rickard, D. T. (n.d.). The many faces of fool’s gold. Retrieved from the American Scientist.

7. Gray, J. C. (2003, September). Earning their stripes: What striations can tell us about a mineral. In Tips and Trips, Volume XXXII/Nine. Retrieved from the Georgia Mineral Society.